When last week Canonical announced the usual UDS was not going to happen I was a bit shocked and disappointed: starting from the next UDS (that is going to happen tomorrow!) the event will be online only and every 3 months. During these days I've been thinking a lot about this move and I will tell you what are the pros and cons, in my opinion, followed by some final thoughts.

Having 4 UDS every year, instead of 2, is surely a better thing. I'm a big fan of Scrum methodology, so I think that iterating more often is better than iterating less. If there are any mistakes you can correct them and iterating again before releasing the final product.

Potentially more people can partecipate to the event (even the opposite is true and I will explain why). People won't need to move from home, travel, pay any expense etc... they just need a computer and a good Internet connection.

It's cheaper for everyone: I can just imagine how expensive could be for Canonical to organize a similar event. Booking a big hotel, paying travel and expenses to near one houndred of community people. People who didn't get any sponsorization had to pay all the travel expenses to attend the event.

Potentially less people can partecipate to the event. Yes, like I said before even this sentence is true and I will explain why. First of all, using Google+ there are at least three countries that will be cut out: China, Thailand and Vietnam. Google+ is not available in those countries.

Are you sure that special people will be able to follow the event? For example blind people won't be able to chat or to ask question in the chat.

Only 10 people will be able to talk. In normal UDS sessions more people could raise the hand and ask a question or interact with the track leaders. Who will choose the 10 people with audio+video streaming rights?

We will completly miss the social aspect of the UDS. If you think this was only a secondary part, please go on. I felt more committed to work and collaborate with people I met in person than with someone I've never met before.

Announcing an event, even if online, just one week before it happens. Really? Some people had already taken vacation from work, booked flights etc... not counting many people that can't take 2 days off from work just with 1 week notice period. It's also almost impossible that community members have the time to schedule a blueprint and be able to discuss about a subject.

From a cutting costs point of view I really can't say anything. Organizing UDS was surely very expensive for Canonical and nobody can blame them if they decided to spend those money in a different way.

What really concerns me: is UDS still useful? My opinion is that at least since latest 2 or 3 UDS the presence of the Community was not so relevant, because I had the clear sensation that the most important decisions were made by Canonical before the UDS and then there was just some details tuning. Another proof of my thoughts is the today announcement: despite the fact that I 100% agree with Unity switching to Qt/QML (I already proposed this 2 years ago during Budapest UDS, but nobody listened to me) I completly disagree with the way the decision was made: not a single involvement or discussion with the community.

I would apreaciate more openness and honesty from Canonical. Do you want to take all the decisions? That's fine, but at least state it clearly.

During the last UDS party, I had an idea to improve Ubuntu development, but I didn't know if it could be a good idea or a stupid one, so I talked to Daniel Holbach and David Planella about it and they were happy to hear about it and Daniel told me to talk about this directly to Mark (and I did it).

From an UDS and the next one, it would be useful to have a development sprint where people can talk about assigned UDS blueprints, at which point they are on their tasks, if they have any problems and if they will finish them within the next UDS.

Of course Canonical cannot organize another meeting, it would be very expensive, so the idea is: why don't we use Google Hangout to organize the sprint? I has a limit of 10 people, I know, but we could select (for example) 5 from the community and 5 from Canonical. There would be parallel meeting and tracks, we would use the same blueprints used during the last UDS and we would add further notes. The attendees would be able to listen and watch the stream and make questions through the available chat.

I've also created a wiki page with more informations and you can find it here: https://wiki.ubuntu.com/UbuntuReleaseSprint

What do you think about? I know that Canonical is already organizing sprints and this could be a way to involve more the Ubuntu Community. Maybe we should schedule a session at next UDS to talk about this?

I hope to get some feedback from you. 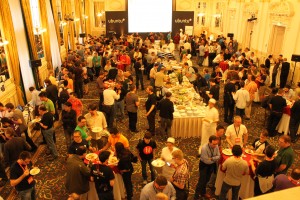