Few days ago I published some notes about my personal experience with PR 1.1.1 firmware upgrade in Nokia N900. In particular my device got an infinite reboot loop after upgrading the firmware and I had to flash the firmware image from scratch to fix the problem. Today I was kindly contacted by Max Waterman (I suppose he works for Nokia) and he explained me what was the problem. It was caused by a little bug in Harmattan UI demo and they fixed it (the fix is already available in extras-devel).

No surprise for me: extras-devel contains unstable packages and if user enables it, he does at his own risk. The most important thing is the fact that the official firmware without any unstable application doesn't suffer of this problem at all. The thing that really impressed me so much (in a positive sense) it's that I was contacted privately by a Nokia developer apologizing for the bug (no problem man, it's part of the game if someone want to test extras-devel software) and explaining that they already fixed it.

This is what I like of Maemo (or should I already call it MeeGo?), I really feel to be a part of it!

I don't know if it's just a case or if I'm the only one who had these problems, but I'll report them anyway, maybe somebody had my same problem and we could try to prepare a proper bug report to make the Maemo team fix them.

First of all I have to say that before upgrading to PR 1.1.1 I checked if I had enough space on the rootfs. I only had 27 Mb and so I decided to remove some unused applications, deleted some *.deb in /var/cache/apt/archives and disabled extras repositories. Of course I also did a backup of all my configuration. After the cleaning operation I had near 60 Mb free on rootfs, enough to install the upgrade.

I closed all running applications, started the application manager and began the upgrade. After the upgrade was completed, the device did a reboot... then another one, then again, again.... until I had to remove the battery to stop it.

Conclusion: I had to re-flash the device with the latest image to make it work again.

mafw-dbus-wrapper taking all the CPU

I was watching a video (using subtitles) and after some minutes the whole UI became unresponsive. Strange because I already did this before without having any problem. I tried to check the problem using "top" utility from terminal and I saw that there was a mafw process (mafw-dbus-wrapper) that was taking 80-90% of CPU. My fault is that normally there are at least 3-4 , mafw-dbus-wrapper processes and I didn't check which one was causing the problem. Anyway I made a screenshot, just in case it can help. 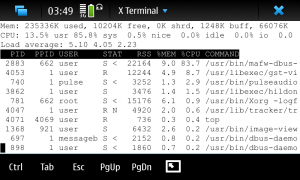 I hope this short report can be useful to help Maemo team to fix or at least investigate what happened. Just leave a comment or contact me if you need more informations. 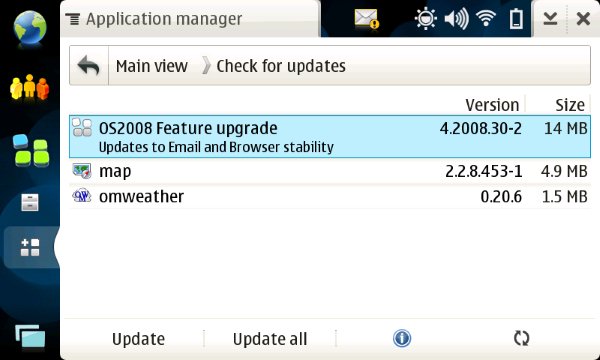 All you have to do is connect to Internet, refresh package list and install the updates.

The total size to download is about 19 Mb and for the first time, no re-flash is required to update N810 firmware. At the end of the installation you're only required to restart the device.

N.B: be sure to have at least 19Mb free on the device, else the upgrade will fail.